According to a culmination of research on the subject, one distinguishing personality trait between conservatives and liberals is the ability to accept ambiguity. As you might expect, liberals tend to be tolerant and conservatives much less so. So this made me think about my childhood (since I've been a liberal for as long as I can remember), and I recall on multiple occasions recognizing the difference between what is "supposed to be true" and "what actually is true" (e.g., that I, as a girl, was not "supposed to" like sports like football; but I did).  Maybe this realization led to a sense of uncertainty, which led to a more general liberal philosophy of not accepting "the accepted truth".  So, I wonder if other people who are self-described liberals OR who are self-described conservatives have had similar childhood (or more recent) experiences.  OR, what other peoples' theories about the origins of political beliefs are.

Next Thursday (Oct 4), my family and I are doing the Light The Night Walk, to raise money for the Leukemia and Lymphoma Society. We’re doing this walk in honor of my brother, Paul, who died from leukemia at age 17, and to raise money so that others can be helped. This is the number one disease killer of children.

You can find more information and donate by going to this website:

THANKS SO MUCH to all you awesome people who have already donated!  My faith in humanity has rebounded :). 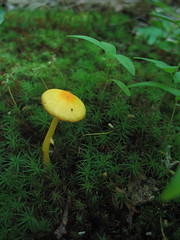 yellow mushroom
Originally uploaded by GreatestStephi.
Ran across this little guy hiking at Allegheny National Forest yesterday. I'd never seen so many different kinds of mushrooms in one forest before, but this one was my favorite. Thanks to

chrismaverick for help with the close-up!

This morning I had a dream where the Steelers were playing in the Superbowl in the church parking lot next to my parents' house. Palamaulu intercepted a pass and kept running with it down the street (click click click...) in front of their house, where my van was parked. He was so happy that he shook my van hard enough for the back window to shatter. But he was so nice that he didn't go back to the game, but stayed to fix it himself. I tried to convince him to go back, believe me, I didn't want to be responsible for us losing. (For those of a more superstitious nature, I will not reveal the outcome of the game.)

As is my usual morning routine, I was listening to David Lee Roth incoherently ramble. This time it was about the Super Bowl and he claimed that women aren't interested in football. Which made me 1) angry at his stupidity and tempted to call in, and 2) wonder if Pittsburgh women are unique.

1) Beers. You're sneaky. Anyone who finds it lurking around our house, please take it away. Kill it.
2) Bears. Also sneaky. I haven't seen you around, but I know you're out there.

Come help Mav celebrate his birthday tonight at Sushi Two (the one on the South Side). We're meeting at 8:00. Let me or Mav know if you can make it.

This Saturday was largely spent building a thousand-part lego motorcycle at the behest of my nephew during his birthday party. By 9pm I finished the motorcycle, then started its launcher, which my brother finished building the next day.

Sunday night we met my parents at Damon's at the Waterfront. "Happy Father's Day"s were said to the appropriate people, and my nephew wished Mav a happy father's day. (Mav denied.) Then my nephew claimed he was "almost a father", and that "he had practice yesterday".

Apparently celebrating your birthday on Father's Day makes you a father.

OK, I HAD to say something in this discussion on race...

(forgive the ugly link, I'm not on my computer)

Very nice, fun weekend, with the Hawaiian Jam/housewarming party. Thanks to everyone who came--I hope you all had fun! I have to add that I was impressed at how little post-party clean-up there was.

But the highlight of my weekend was earlier on Saturday, when my parents and brother and his family came over for a barbeque. My niece was so cute; she's so girly (unlike me--I was a total tomboy). She found our box of accesories for HJ, and put on a flowery head band and lei and stood in front of a mirror, saying she looked beautiful. She put the headband on Mav, and told him he looked beautiful. She also managed to track down Otto, who was nice enough to let her pet him for some time before slinking off to hide in the closet. (My cats are terrified of small kids.) Later, I taught my nephew to play pool. He managed to knock a few balls in, and seemed really proud of himself, which made me very happy.

Just read this article and wondered what people (esp. Black people) think about it: